Here are some links worth checking out if you are studying ‘Macbeth’:

A clip about the character of Lady Macbeth
http://www.bbc.co.uk/learningzone/clips/macbeth-lady-macbeth-in-context/3041.html

Some challenging stuff from the RSC
http://www.rsc.org.uk/explore/macbeth/

Franciscan College Gormanston has just created an official Twitter account. Mr. Lavin will tweet regularly about various events in the school. His tweets will cover all areas of college life such as reading events, sporting events, information on college trips and college clubs.
Find Mr. Lavin with the following twitter handle: @gormocollege

‘How Many Miles to Babylon?’ is set in the early 1900s until the early part of the First World War. At this time, Ireland was under British rule. 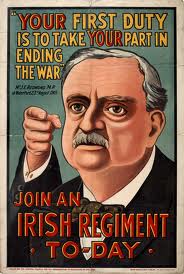 John Redmond was the leader of the Home Rule Party from 1900 until he died in 1918. The Home Rule Party wanted Ireland to be allowed to govern herself but did not seek independence from Britain. It did not support the use of violence.
Home Rulers had many opponents. The Ulster Volunteers were formed in 1913 in order to prevent Home Rule, even using violence if necessary. In southern Ireland the Irish National Volunteers were formed. They wanted more than Home Rule.
The Home Rule Bill was passed by the British Parliament in September 1918 but it was agreed that it would not come into effect until the war was over. At this time John Redmond asked the Irish National Volunteers to join the British army and support the war movement. He believed this would help the the Home Rule Bill gain popularity in Britain. The Ulster Volunteers also wanted their supporters to support Britain. Over 200,000 Irish men fought in the First World War. Many joined simply for economic reasons.
One of Redmond’s opponents was Padraig Pearse. He supported Home Rule at first  but soon began to believe that Ireland would never gain independence from Britain while so many people in Ulster opposed it. When war broke out in 1914 Pearse and his supporters saw an opportunity for Irish rebellion while the British were busy fighting in Europe. He became one of the leaders of a group which split from Redmond and began to prepare for insurrection.