Images of sickness and disease abound.

The ghastly visible effects which the poison had on Old Hamlet:
‘And a most instant tetter bark’d about,
Most lazar-like, with vile and loathsome crust,
All my smooth body.’ (1.5.71-73)

References to sickness and disease apply sometimes to individuals and sometimes to humankind in general, and somtimes to the state of Denmark or the whole world. But whomever they refer to, they profoundly influence the general vision and viewpoint of the play.

Gertrude speaks of her ‘sick soul’ (4.5.17); Laertes refers to ‘sickness in my heart’ and how ‘The canker galls the infants of the spring / Too oft before their buttons be disclosed’. Hamlet tells Rosencrantz and Guildenstern that his ‘wit’s diseased’ and uses an image of disease to berate and warn his mother in her relations with the current King. He implores her not to console herself with the belief that the apparition of her dead husband is due to her son’s madness. That self-deception will have a fatal moral effect:
‘Lay not that flattering unction to your soul . . .
It will but skin and film the ulcerous place,
Whiles rank corruption, mining all within,
Infects unseen.’ (3.4.145-149)

The King justifies his decision to send his step-son to England by means of a medical metaphor:
‘Diseases desperate grown
By desperate appliance are relieved
Or not at all.’ (4.3.9-11)

Claudius then sums up the danger presented to himself by Hamlet’s unexpected return through yet another sickness image:
‘But to the quick of the ulcer,
Hamlet comes back.’ (4.7.123-124)

All these images of sickness, disease and rottenness make referece to and symbolise the corruption that is at the heart of the state, and the associated evil in humankind that has caused this corruption to occur.

Hamlet describes to Horatio the ease with which subversion can occur, and how human nature can be infected or corrupted by a very small blemish:
‘. . . that these men,
Carrying, I say, the stamp of one defect . . .
His virtues else, be they as pure as grace . . .
Shall in the general censure take corruption
From that particular fault.’ (1.4.30-36)

According to Hamlet, Claudius is ‘the canker of our nature’.

Themes that arise in Boland’s poetry:
Ireland’s troubled and violent past
The significance of myth
The experience of being a woman – mother, housewife, lover . . .
Truth
Love and Relationships
Suburbia
Public and private worlds
History
Marriage

Forging a personal understanding
Which poems did you particularly like?
What were the main issues raised for you?
What setting, colours and moods do you associate with Boland?
What did Boland add to your personal understanding of Irish history?
Does Boland make an important contribution to feminist thinking?
What insights did she give you into suburban life?
Would you consider her a radical poet?
Why do you think we should read her poetry?
What general understanding of the poet did you form?
What is important in her life?
How does she see herself?
Is she a happy or a sad person?

This refers to a figure of speech in which contradictory and opposite ideas are linked. It is similar to a paradox, but the oxymoron is contained within a phrase whereas the paradox is contained in a statement.

In Shakespeare’s ‘Romeo and Juliet’, Romeo uses oxymorons when describing his love of Rosaline to Benvolio:
‘Why then, O brawling love! O loving hate!
O anything of nothing first create,
A heavy lightness, a serious vanity,
Misshapen chaos of wellseeming forms,
Feather of lead.’

2011
‘Boland’s reflective insights are expressed through her precise use of language.’
Write your response to this statement, supporting your answer with suitable reference to the poetry on your course.

If you find yourself with some time on your hands then follow this link to play Grammar Ninja. Will you become a Master Ninja? 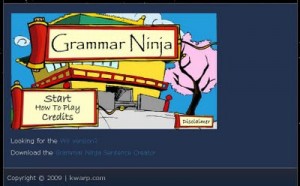 Anybody who has learned how to type will probably know what a pangram is. It is a sentence that uses every letter of the alphabet. Here are some well know examples:

Lorem Ipsum
Lorem Ipsum is dummy text that is used in the printing industry to demonstrate the way different fonts look. It has its root in a book by Cicero called ‘De Finibus Bonorum et Malorum’ (‘The Extremes of Good and Evil’, published in 45BC). Latin only has 23 letters – it does not use J, V or W (however, V is occasionally used to represent U and J is occasionally used to represent I). The standard piece of Lorem Ipsum used is usually:

This roughly translates as:

‘There is no one who loves pain itself, who seeks after it and wants to have it, simply because it is pain . . . ‘

Why do we use Lorem Ipsum?
It is widely believed that a reader will be distracted by looking at the readable content of a page when looking at its layout. The point of using Lorem Ipsum is that the appearance of Latin on the page is similar to that of readable English. Many desktop publishing packages and web page editors use Lorem Ipsum as their default model text. Various versions have evolved over the years, some due to typing errors and some due to subtle additions of humour by the designers.

2010
In your opinion, is Kavanagh successful in achieving his desire to transform the ordinary world into something extraordinary?
Support your answer with suitable reference to the poems on your course.

2004
Imagine you were asked to select one or more of Patrick Kavanagh’s poems from your course for inclusion in a short anthology entitled ‘The Essential Kavanagh’.
Give reasons for your choice, quoting from or referring to the poem or poems you have chosen.

‘The loneliness and isolation of the individual are the themes which dominate Kavanagh’s poetry.’
Discuss this statement in relation to the poems by Patrick Kavanagh on your course.

‘The relationship between place and person is central to the poetry of Patrick Kavanagh.’
Discuss this view of Kavanagh’s poetry referring to the poems studied by you.

How effective is Kavanagh’s portrayal of Irish rural society in your opinion?
Refer to the poems by Kavanagh on your Leaving Certificate course.

‘Kavanagh’s poetry is pervaded by a deep sense of loss.’
Do you agree or disagree with this statement? Support the points you make with reference to the poems by Kavanagh studied by you.

In preparation for our revision on Patrick Kavanagh tomorrow, here is Luke Kelly’s version of the haunting ‘On Raglan Road’.

One of the people who will forever be associated with Titanic is Bruce Ismay, owner of the White Star Line that made the ship. He was on the maiden voyage and, of course, survived the tragedy. His fate his sympathetically described by Derek Mahon in the poem ‘After the Titanic’:

They said I got away in a boat
And humbled me at the inquiry. I tell you
I sank as far that night as any
Hero. As I sat shivering on the dark water
I turned to ice to hear my costly
Life go thundering down in a pandemonium of
Prams, pianos, sideboards, winches,
Boilers bursting and shredded ragtime. Now I hide
In a lonely house behind the sea
Where the tide leaves broken toys  and hatboxes
Silently at my door. The showers of
April, flowers of May mean nothing to me, nor the
Late light of June, when my gardener
Describes to strangers how the old man stays in bed
On seaward mornings after nights of
Wind, takes his cocaine and will see no one. Then it is
I drown again with all those dim
Lost faces I never understood, my poor soul
Screams out in the starlight, heart
Breaks loose and rolls down like a stone.
Include me in your lamentations.

His life after Titanic is described in an article written by Rosita Boland in the Irish Times of 7th April 2012. Follow this link to read the article:

If your time and interest stretch to reading a whole book on the topic then it is worth looking at Frances Wilson’s biography ‘How to Survive the Titanic or The Sinking of Bruce Ismay’.

With the 100th anniversary of the sinking of the Titanic coming up, here is the text of Thoma Hardy’s poem about the incident. It was published in 1915 and contrasts the materialism of humankind with the integrity and beauty of nature.

The Convergence of the Twain
by Tomas Hardy

I
In a solitude of the sea
Deep from human vanity,
And the Pride of Life that planned her, stilly couches she.

III
Over the mirrors meant
To glass the opulent
The sea-worm crawls – grotesque, slimed, dumb, indifferent.

IV
Jewels in joy designed
To ravish the sensuous mind
Lie lightless, all their sparkles bleared and black and blind.

V
Dim moon-eyed fishes near
Gaze at the gilded gear
And query ‘What does this vaingloriousness down here?’ . . .

VI
Well, while was fashioning
This creature of cleaving wing,
The Immanent Will that stirs and urges everything

VII
Prepared a sinister mate
For her – so gaily great –
A Shape of Ice, for the time so far and dissociate.

VII
And as the smart ship grew
In stature, grace and hue,
In shadowy silent distance grew the Iceberg too.

IX
Alien they seemed to be;
No mortal eye could see
The intimate welding of their later history,

X
Or sign that they were bent
By paths coincident
On being twin halves of one august event,

XI
Til the Spinner of the Years
Said ‘Now!’ And each one hears,
And consummation comes, and jars two hemispheres.