Many of you will be looking for something good to read this mid-term break and it is always worthwhile going back to the classics. The book that the whole college community (pupils, teachers, non-teaching staff, parents and past-pupils) will be encouraged to read for the month of November is ‘The Great Gatsby’ by F. Scott Fitzgerald. It is set in New York in the Roaring Twenties and is considered to be a Great American Novel.

It is narrated by Nick Carraway but the title refers to the character Jay Gatsby, a young, mysterious millionaire who is obsessed with Daisy Buchanan. Daisy, however, is married to Tom Buchanan. The story is full of parties, conflict, drama, mystery and intrigue. It is easy to see why it is a classic.

A famous film version of this novel was relased in 1974 with Robert Redford playing Gatsby, Mia Farrow playing Daisy and Sam Waterstone playing Nick. However, a new version is about to be released. This sees Leonardo Dicaprio as Gatsby, Carey Mulligan as Daisy and Toby Maguire as Nick. Film versions are fantastic, but it would be great to read the book first! 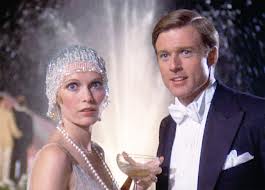 Daisy and Gatsby at one of the lavish parties in the 1974 film version.

Here is the trailer for the new movie version.