Last week was Space Week in the Library and here we can see some of our junior students with a display of books that are available.

Students have access to a wide range of books – both fiction and non-fiction. The library, run by the Parents’ Association, operates themed weeks during the course of the year. Be sure to pop in whenever you can to find out what is going on! 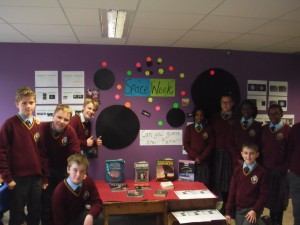 Students with a display of books about space.

He was born on 24th May 1941 in Minnesota and began writing and performing in his teenager years and has not stopped since.

Permanent secretary of the Swedish Academy, Sarah Danius, said later: ‘We we’re really giving it to Bob Dylan as a great poet – that’s the reason we awarded him the prize. He’s a great poet in the English tradition, stretching from Milton and Blake onwards. And he’s a very interesting traditionalist, in a highly original way. Not just the written tradition, but also the oral one; not just high literature, but also low literature.’

Author Salman Rushdie stated that he was delighted with Dylan’s win and said that his lyrics ‘had been an inspiration to me all my life since I first heard a Dylan album at school.’

Prof Seamus Perry, chair of the English faculty at Oxford University, compared Dylan’s talent to that of the poet Alfred Lord Tennyson, calling the songwriter ‘representative and yet wholly individual, humane, angry, funny and tender by turn; really, wholly himself, one of the greats’.

Author Joyce Carol Oates said there should be no question about Dylan’s work being considered literature, praising the academy’s ‘inspired and original choice’.

Not everyone was overjoyed by the announcement, however. Irvine Welsh, the author of Trainspotting, said that although he was a Dylan fan ‘this is an ill-conceived nostalgia award wrenched from the rancid prostates of senile, gibbering hippies’.

Here is one of my favourites:

First year students have been very busy already this year, writing poems on topics that are of personal interest to them.

One such poem was written by Ife Jawando on 28th September 2016 as part of Bullying Awareness Week in the school. Have a read of this thought-provoking piece of work:

I don’t know why I do what I do.
But all you know is that people hate you.
You try and try to change
I take my anger out on the firing range.

I try to be a better person.
But my situation finds a way to worsen.
I hear all screaming and crying.
If I said I was nice I’d by lying.

I get no attention at home.
People wish I was sent away to Rome.
Got a mum, but not a dad.
She is always so sad.

They say my temper is a fad.
I do not know why I get so mad.

This next poem was written by Ruairí Costigan on 30th September 2016. It is on the ever-present news topic of violence caused by drugs and gang feuds.

Bang bang he is dead,
I wish we could’ve just broke bread.
In these gang wars no one is keeping scores.
For the battles I have fought
My family are being sought.
To them my kids’ lives do not matter;
From them I only hear
Sadistic laughter.
Good men’s blood drips from tables:
Because this job is dangerous but the income is stable.
Good men’s blood drips from chairs:
This could’ve stopped with warning flares.
Good men’s blood drips from the wall:
May name it seems to call.
It’s a sweet adolescent sound telling me
Civilians are buried underground.
The voice is softly spoken –
I reject it for my soul has been broken.
Nothing to me is trustworthy;
To my family I am unworthy.
I’m now counting my days.
I’m now a man that prays.
I know my soul is diminished.
I know my life is finished.
And it’s all for fame and glory,
This is how I must end my story.
I am sorry for my family – to you I lied.
I am sorry to the families of those who died.
I am sorry to those I made join my side . . .

I’m sure you’ll agree that these are powerful and moving poem. They show the great potential that we have here in our First Year group – we shall be expecting a continuation of this high standard from them as the year progresses.